Jack gets a medal.

Jack knew little of his mother and less than nothing about his father. The dark green sweater with the name tag “Bridget” could have been borrowed. Or stolen. The rest of her clothing, a shapeless house dress and worn out Keds, were shabby and ill-fitting. She was probably Catholic, given where she was when Jack’s birth overtook her. Sister Agatha would describe her to him just once. Once was all Jack would need.

“Tell me about my mother.”

Sister Agatha sat across from Jack at the chipped, enamel-topped table in the convent kitchen. Jack, perched on the step stool in his pajamas, was eye to eye with her over a glass of milk and a peanut butter jelly sandwich she’d slapped together for him. He was just seven; the so-called Age of Reason, with an appetite that had no off switch. He was the worst student with the best grades in Holy Spirit’s third grade. Ag taught reading and writing and she knew Jack’s apparent brilliance was some kind of trick he was playing on all of them, but it was played with a mostly guileless innocence. If she thought too hard about how such an undisciplined hellraiser could get straight A’s, she got a headache. She noticed that his request was not posed as a question.

Until now, whenever Jack had asked about his mother, all they ever said was “the Holy Spirit family is all you need,” a catch-all that Jack found so lame that he’d stop asking at four. He’d already gleaned the basic information from Father McCleod; the only other witness to his birth was Sister Agatha. Really, it was his mother’s death they’d been witness to. Jack had fallen into the world essentially alone.

Sister Ag picked a substantial cigarette butt from the cook’s amber glass ashtray. Mama Dio had sworn to Father McCloud that she would not smoke while there was food cooking, but preparation? It was always teeming with butts and ash. The old nun blew a stream of Camel smoke into the air, then flapped a dish towel to chase the cloud up to the fan. She looked hard at Jack, adding up the evidence. Brown irises that were warm, not inky. Thick, unruly brown hair and his clear Mediterranean complexion. Why they called it olive, she never understood. Olives were green or black. Jack looked just like all four of Mama Dio’s brood. “Another all-American mutt,” she sighed.

“She was young. Too young. A woman grown, but barely. For lack of another name, we called her Bridget from a tag stitched into her cardigan. Dark red hair, pale complected, her pretty face awash in the lightest freckles. No doubt of it, Irish through and through.” Ag would know — she still had more than a trace of brogue.

“Your Daddy, I’m guessing by your skin, was most likely Italian. The Micks and the Eyeties seem to be magnets for one another. We’d all be better off sticking to our own kind." She savored a last drag on the dwindling butt and stared off into the smoke, and Jack was ready. He pounced on her lack of concentration and latched on to her wandering train of thought to the same space and time, helping himself to a replay of her heartache. The reason her people had slapped her into a convent so long ago.

She was sixteen, pregnant, and left standing at the altar in a borrowed dress and a fistful of ditch weeds for a bouquet. Her father, beyond shame in a red-faced fury, had dragged her by the arm and set off on foot for Anthony’s parents’ home just a neighborhood away. “THIS is what I get for letting you go to school. Another bastard to feed.” No one answered his pounding on the door, but Anthony’s mother stuck her head out a second-floor window.

“His father put him on a boat to America yesterday afternoon. The rent money. We’ll be out on the street and my Anthony on his way to America. This is all your fault!” she brayed and slammed the shutters.

Sister Ag hiccupped violently and shook her head. Was she losing her mind?

No, Jack had just stolen it for a few seconds—spied on her now and her next—was what he called it. Soaked up the memory she couldn’t put away and that tomorrow she’d write one more letter home to ask about her boy. The letters that were never answered were her penance.

Jackson Jude Bell was a thief and a hustler. At seven.

He was still learning the limits of his ability. But this was no test of range or reliability. This had been a gross violation of the woman’s privacy and he was ashamed of himself for it because Old Ag had always been good to him. It didn’t take much work up a few tears.

“Here, here, boy. She passed him the dishtowel. You have a good cry for your Mum. Look how she loved you, bringing you here.” Ag wiped her own eyes on her sleeve. “Wait here,” and she shuffled off down the dark hallway that led to the priest’s office.

Jack leaned over sideways to watch and wait, wondering if he had time to sneak a drag. No, she was already fluttering back down the hallway. He slumped back into the morose orphan pose and sniffed.

“Put out your hand.” Jack did as he was told and she let the heavy medal and chain pool into his sticky palm. “We were going to wait until you were a little older, but I’m thinking you need this sooner than later.

They’d found the silver Saint Christopher medal tucked into his mother’s bloodied fist at the time of her death. The long, curb link chain, also silver, was wrapped around her wrist. Jack brought the medal up to his nose to examine the details. The casting was old. No sharp edges anywhere. There was an eerie, blank-eyed angel looming over the shepherd struggling through turbulent water, a pudgy child astride his shoulder, the angel’s wings gracefully framing the tableau. On the reverse, someone had scratched the letters JF into the soft metal with a pin.

He slipped the chain over his head and the medallion fell into his lap, making him flinch and cross his legs. Ag snickered, breaking the somber mood.

Jack took the chain off and passed it across the table to the nun. “Maybe you should hang on to it for me a little bit longer. I’ll be catching it in my zipper.”

Sister Ag glared at him and barked, “Heathen!” They both laughed out loud.

Popular posts from this blog

November 12, 2021
She was not accustomed to driving in commuter traffic which made her a menace. While everyone else was rolling on autopilot, she had a death grip on the wheel and was riding the brake, hanging back from the car in front of her. Being stoned did not help the situation. It was cold and the car's heater was mocking her, blowing cold air in her face, or was that the AC? The controls made no sense.  He was slouched down in the passenger seat, ankle crossed over a knee, foot keeping time with the music from the cassette player, oblivious of her jitters.   Traffic slowed to a crawl then stopped, and she started groping in the depths of her bag. “What are you looking for?” “Lip gloss. My lips are chapped.” “C’mere. He put his hand around the back of her neck, pulled her toward him like he was adjusting a lampshade, and planted a firm kiss on her mouth.  “There. You got the last of it.” His mouth, and now hers, were slicked with something faintly greasy and medicinal.
Read more

September 09, 2022
Starting at dawn to beat the heat got them to lunch by ten-thirty. They lounged on the crude temporary front steps, ate sandwiches from paper sacks, drank Gatorade or beer, and smoked. Gabe tipped his head back, looked up the front of the still-skeletal structure, and asked, “How are you with heights?” Jack shrugged. “Spent half my life on rooftops. Why?” Gabe looked skyward again. “Good, ‘cause way up there on the third level, this layout has a row of clerestory windows. If Ray had his way, we’d be working off ladders, but I’m gonna break his balls to rent some scaffolding.”  He pronounced it ‘clear story’ and Jack was thrown. He knew what they were, but just last night he heard it pronounced clair-RES-tory by a guy he’d stabbed and thrown off a moving train. “What did you call them?” Gabe repeated, “clerestories. Big, fixed-pane fuckers. Heavy as shit. Expensive.” Jack dragged his tongue along the new sharp edge on his lateral incisor. “Just another day at the office. Clear stories
Read more 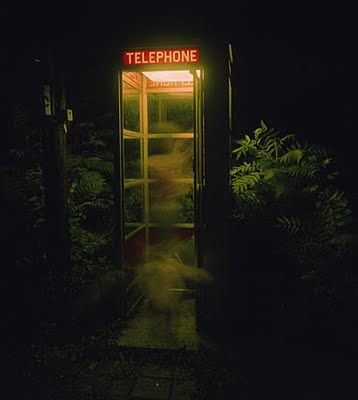 The phone rang four times before I was able to grope the handset out of the cradle. Groggy and hoarse, a muffled “Lo?” was as much as I could offer, my head still on the pillow.   “Is Kitty there?”   I heard the door of a phonebooth screech a few inches and thud shut. I needed to hear his voice again. Immediately. “Who did you want?”   “Kitty. I don't know her last name. We met at the Hi-Lo the other night.”   “Hmmm. The Hi-Lo, huh? She gave you my number?”   “914-232-5646?” He was off by one. Close. So close. The acoustics of the phonebooth was intimate. His voice was like melted butter and dark syrup swirled together. Salty, sweet, smoothly overwhelming.   “No. No kitty here. Just me.”   I yawned. If I could purr, I would have.   “So what number is this?”   “And why would I give you my number if you weren't looking for me in the first place? I snuggled deeper into the warmth of my nest. “Hmmn?”   “Solid point but can I have some slack cause I’m gla
Read more